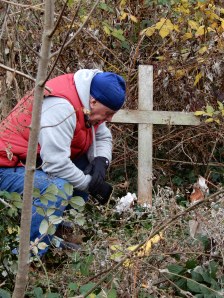 Last week was one for sad anniversaries. November 19th was the 70th anniversary of the death of my mum with the funeral following on the 25th. In addition, Gaynor’s mum died just 2 years ago on the 26th. So Saturday was a sad day for me and Sunday a sad day for both of us. Not unhappy, you will note, just sad. Moreover, for me, that feeling was more positive than negative with its recognition that there was someone important who I’ve no recollection of but who I miss.

Which leads me nicely to the next point which is that my father, somewhat keen to get back to his unit in Germany and his new wife to be, didn’t arrange for a headstone to be put up. Consequently, the plot was grassed over. No big deal except for someone who, 65 years later, wanted to find it. Well, courtesy of an extremely helpful local authority officer, who even provided a wooden cross, we identified the grave; now extremely overgrown. So, for the first time since I was 5, I stood within arms’ length on my mum.  I’ve never felt so at peace in my whole life.

As a result, come Sunday, Gaynor and I went to Nunhead Cemetery, where the grave was now even more overgrown and fenced off  but still identifiable by that cross. After climbing the fence and hacking down the brambles, I placed a small cyclamen at the foot of the cross and spent some quiet time just feeling and thinking of what might have been. The sadness was still there but it’s tempered by more of a completeness and I can’t tell you how good that feels. The plan now is to put up a headstone.

We sat on the train on the way home, somewhat quiet, with both of us thinking of people we miss.