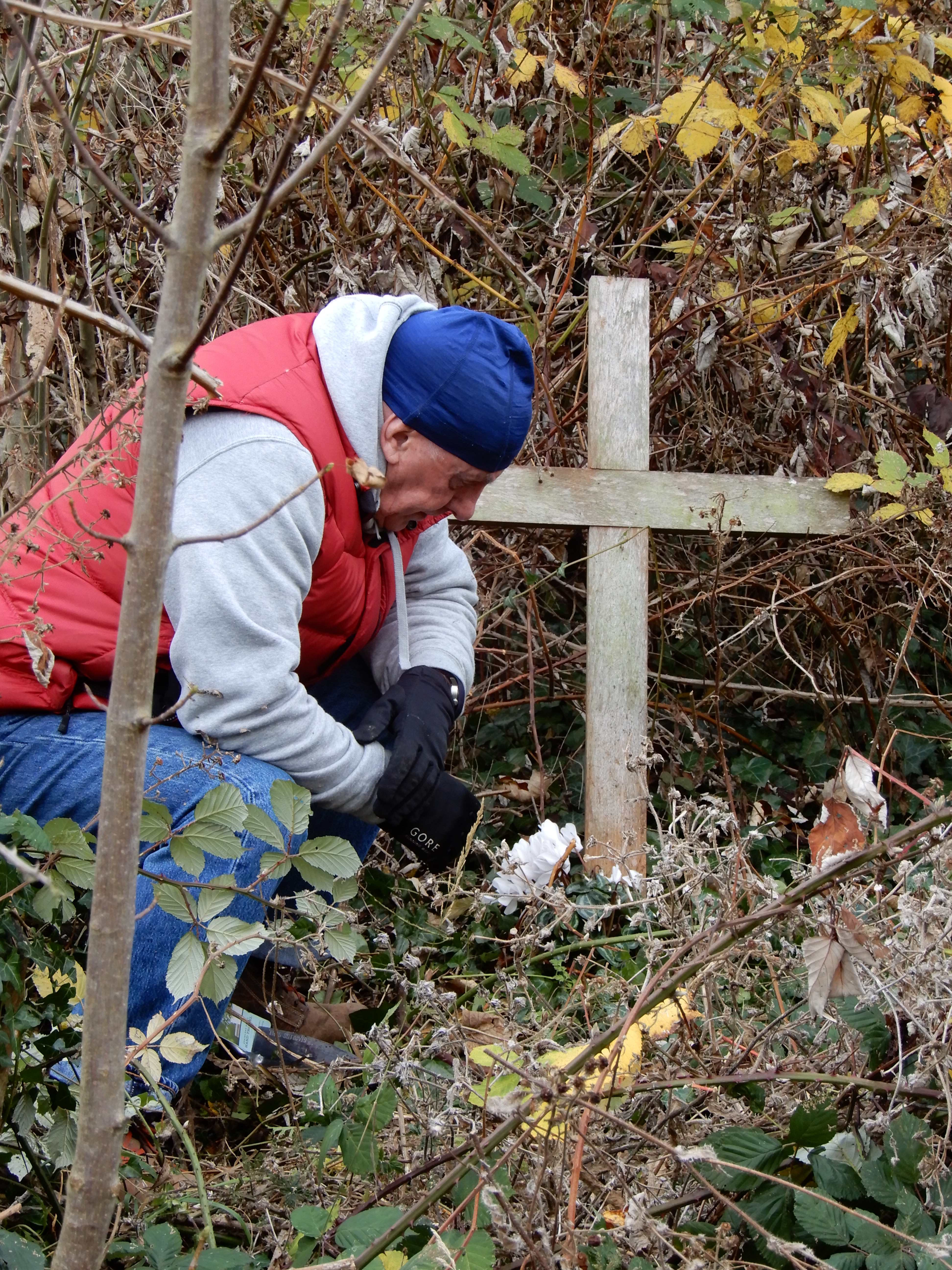 Last week was one for sad anniversaries. November 19th was the 70th anniversary of the death of my mum with the funeral following on the 25th. In addition, Gaynor’s mum died just 2 years ago on the 26th. So Saturday was a sad day for me and Sunday a sad day for both of us. Not unhappy, you will note, just sad. Moreover, for me, that feeling was more positive than negative with its recognition that there was someone important who I’ve no recollection of but who I miss.

Which leads me nicely to the next point which is that my father, somewhat keen to get back to his unit in Germany and his new wife to be, didn’t arrange for a headstone to be put up. Consequently, the plot was grassed over. No big deal except for someone who, 65 years later, wanted to find it. Well, courtesy of an extremely helpful local authority officer, who even provided a wooden cross, we identified the grave; now extremely overgrown. So, for the first time since I was 5, I stood within arms’ length on my mum.  I’ve never felt so at peace in my whole life.

As a result, come Sunday, Gaynor and I went to Nunhead Cemetery, where the grave was now even more overgrown and fenced off  but still identifiable by that cross. After climbing the fence and hacking down the brambles, I placed a small cyclamen at the foot of the cross and spent some quiet time just feeling and thinking of what might have been. The sadness was still there but it’s tempered by more of a completeness and I can’t tell you how good that feels. The plan now is to put up a headstone.

We sat on the train on the way home, somewhat quiet, with both of us thinking of people we miss.

On 22 November 1962, President Kennedy was assassinated in Dallas and I was a lowly NCO on guard duty at HQ 1 Corps in Bielefeld with little expectation in life. Certainly vague dreams of what might be, yet knowing that they weren’t for the working class boy that was me. Fast forward 55 years and those dreams are being realised in ways that I could never have imagined then.

You see, I’ve been talking about writing a novel since my 30’s with no real expectation that I would. Even when I did actually write my first, nonfiction, book and those that followed, the fictional one  was restricted to an opening chapter; albeit a good one. It was as if whatever was inside refused to come out. Hence my recent enrolment on a Guardian Masterclass in novel writing.

Now, I have to say that this course has been really enjoyable and useful. However, the breakthrough that I’d hoped for hadn’t happened, until last night. Moreover, it took place by the simple expedient of being set a number of tasks each of 15 minutes duration. For someone who is normally a self starter, it was this external imperative that was the spur. And it worked.

During the evening, we were given extracts to read, the first of which was one with dialogue and little description; the former providing the latter. Well, dialogue, I’m told is something that I have an ear for so that was no real problem. However, some time later we were given another extract where description was more dominant and asked to rewrite our first attempt in a more descriptive form. “Oh dear” I thought, until I started to put pen to paper when I couldn’t stop writing and 2½ pages of dialogue and description appeared on the paper. Who would have believed it? Importantly, I now know that I can write fiction.

Which demonstrates my tagline as a speaker, “All you have to do is try” albeit with some intent.

I’m off to bed shortly just 70 years this evening since, as a young child, I went to bed on my own the day mum my died. For many years, I took no account of her death as she was never mentioned again. In my naivety, I actually believed that it had no effect at all. How daft was that?

Well, these days, I’m conscious of what I missed and the hole that was created by her absence; made worse by a father who left to go back to his unit in Germany to remarry soon afterwards. So this morning was a sad and contemplative time during which I thought about that person I have no memory of. As is the case these days, I think of what might have been while recognizing that this is a fairly pointless exercise. I also realize that sadness is the natural result of such events and that it’s OK to feel that way about someone you miss very, very much.

The past few months have brought changes to the Daligan household, some of them personal and some physical. However, in contrast to my former life, none of them have been other than beneficial. The overall result has seen a greater contentment alongside further achievement. There is still a little way to go in both these areas; however, the former seems to be aiding and abetting the latter.  And that ain’t no coincidence!

We started with the garden, particularly the lawn, which had resisted our attempts to get it to grow properly for as long as I can remember. However, as I explained to it before this latest attempt, if it didn’t work this time, I would concrete it over. That seems to have done the trick, along with relaying the path so that more of it and the plants were in the sun; plus, of course, the tons of horse manure I put on the garden some years ago. This was followed by a new boiler after the (16 year old one) finally expired. This, itself, was then followed by renovating the bathroom. This was looking a little the worse for wear and now looks bright and new. Finally we move on to having the flat decorated; something that is nearly finished. As I work from home and we don’t have too much in the way of extra space, this has involved moving stuff from one room to another (including 2,000 or so books) overnight so that the decorator could continue his work in the morning.

In addition, my fourth book, “Why Don’t You Just Support Arsenal? The Life and Times of a Spurs Supporter” has now had its final edit and should be ready for printing soon. In the meantime, I am in touch with a number of sporting literary agents to see if I can get one of them to take it up. I also have the various Spurs’ fans message boards and a list of celebrity supporters to contact. Lastly, on the personal front, I’ve managed to break down some of those internal barriers which have prevented me from doing what I’ve long wanted to do. Among these has been, courtesy of a Guardian Masterclass, writing a novel which is helping me to turn a short story, that I have, into my first work of fiction.

It’s just a pity that I spent until my 30’s allowing life to get in the way. No longer although, to quote Loudon Wainwright, I do “Need a Double Lifetime”.

.@BorisJohnson, this isn’t a game!

Delays to food and medicine imports will put our lives and livelihoods at risk. In these conditions, #NoDealBrexit would cause huge suffering.

Please extend the #Brexit transition period and do a deal.