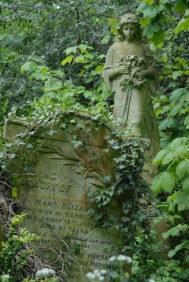 Over the weekend, Gaynor, Ellie and I went to Nunhead Cemetery. It’s a place that I first visited when my mum was buried there in 1947, yet never went back to until 1985. It, too, is a little piece of Wonderland; albeit for different reasons than the others that I’ve described in previous blogs. It is, if nothing else, a wonderful demonstration of the fact that nature will always win in the end. Indeed, you have only to look at the photos I took to see that.

Nunhead was one of the original seven London cemeteries that were built to cater for the Capital’s dead during the Victorian era. In the 1970’s, it was closed and left; one might say, “for dead”. Well, nature took over in the form of flora and fauna as did people who had little better to do than desecrate the graves.  As my mum was buried without a headstone, her grave was spared.

Some years ago, the Friends of Nunhead Cemetery decided to do something about the situation and the cemetery was reopened. So much so that it is now in use again; with a difference. A programme of, almost, managed decay has rescued some areas and left nature to take over others. The process has created something very special and well worth a visit.

A few years ago, with the assistance of an extremely helpful Council official (also named Mike), I identified my mum’s grave. So helpful was he that he even provided a wooden cross and hammered it in for me to mark where she was buried. I can’t even begin to describe the feeling of standing over where she lay a mere six feet away. I don’t think that I’ve ever felt so sad or so at ease.

Well, as a family, we went to look for the grave again over the weekend, with me fully expecting that the cross would have been removed. Imagine my joy to find that it hadn’t been and, once again, those feelings were back as were a few tears. Gaynor and Ellie left me for five minutes before returning so that we could all to stand together.

My intention now is to put up a headstone so that future generations will know of my mum’s existence in a way that I didn’t. Truly, a Wonderland. Go see.